From email to personal banking to health apps, we’re increasingly using our mobile devices to help us manage our day-to-day lives. So it’s no surprise that NFC mobile payments— paying for stuff via your smartphone — are picking up steam. Soon, more and more of your customers will want to pay with their devices.

So to prep you for the sea change, here’s a guide to NFC and how to accept it at your business.

NFC (near field communication) is the technology that allows two devices — like your phone and a payments terminal — to talk to each other when they’re close together.

NFC is the technology that enables contactless payments.

The buzziest are Apple Pay, Android Pay, and Samsung Pay.

You’ll need to get a new NFC-enabled payments reader that can accept contactless payments. The Square contactless and chip reader accepts both NFC and EMV payments.

Not necessarily. Some can be hundreds of dollars, but Square’s NFC-enabled reader is just $49.

NFC (near field communication) is what enables two devices to communicate wirelessly when they’re close together.

NFC is actually a subset of something called RFID (radio-frequency identification), a technology that allows us to identify things through radio waves. RFID is nothing new — it’s been used for decades for things like scanning items in grocery stores and luggage on baggage claims, and tagging cattle. 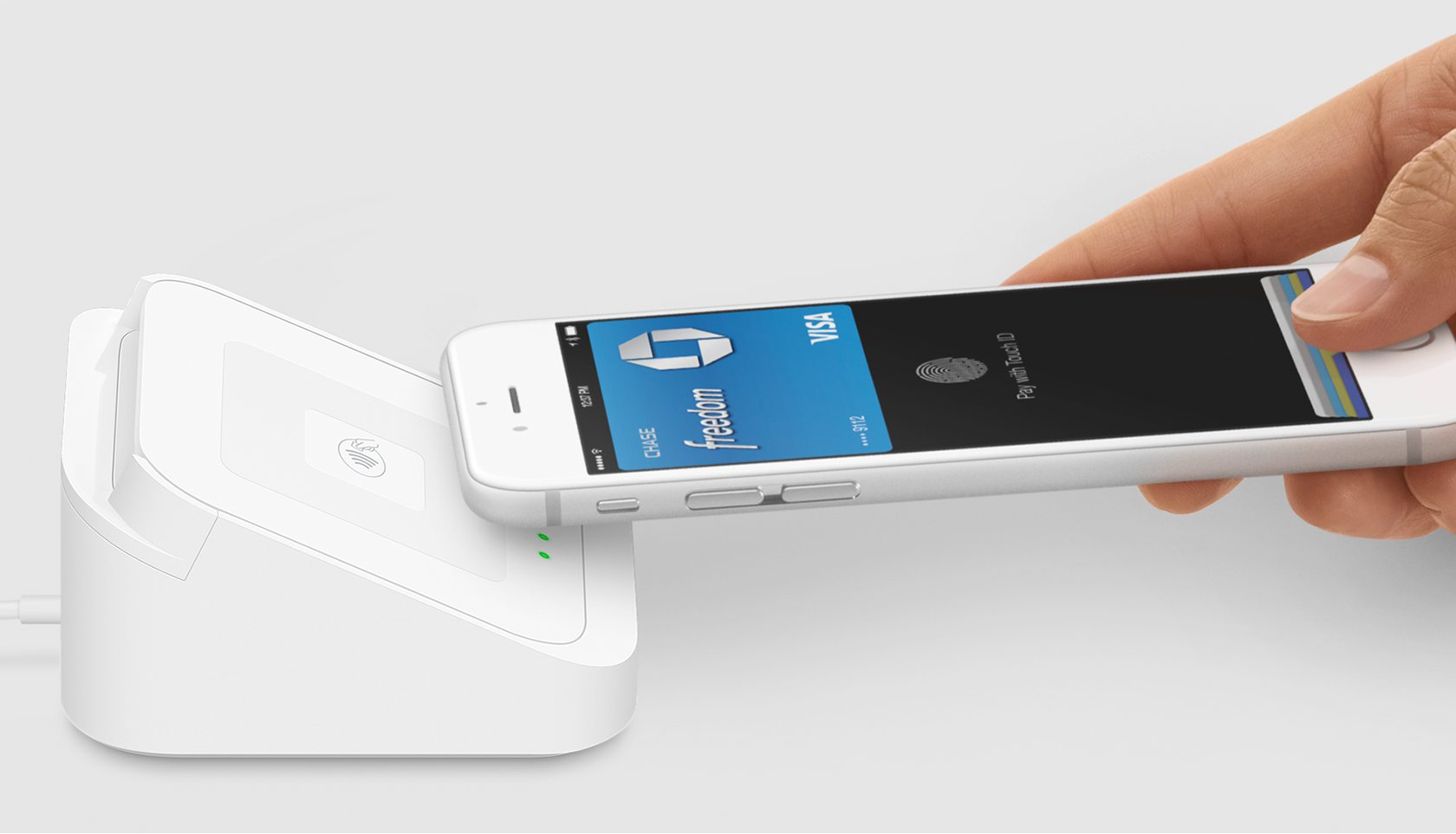 If you’ve stood in line at large retailers like Whole Foods, Walgreens, or Office Depot recently, you’ve probably already seen a contactless payment in action. A contactless payment is a transaction that requires no physical contact between a device (aka a smartphone) and a payments terminal. Meaning, people can just hold up their mobile devices to pay.

In an NFC payment, you tap or hover your device to pay.

NFC is the technology that’s at play here — it’s the way the mobile device and the NFC-enabled point-of-sale system talk back and forth to each other to process a payment. The devices do have to be close, though (that’s where the “near” part of near field communication comes in). For a contactless payment to go off seamlessly, you usually have to hold your phone two inches or less from the reader.

When a contactless payment is initiated (by a customer holding or tapping a mobile device to the payments terminal), the NFC technology goes to work. Using that specific frequency we talked about, the NFC-enabled reader and the smartphone pass encrypted information back and forth to each other to complete the payment. This all takes just seconds.

Speed, in fact, is one of the coolest parts of NFC payments. They take a fraction of the time of magstripe and chip card transactions, and they are leagues faster than cash.

The idea of paying through a mobile device can make some people uneasy, especially because we’re so accustomed to keeping our wallets close to the vest (so to speak). But NFC payments are extremely secure — way more secure, in fact, than magnetic-stripe cards.

As opposed to the data on a magnetic-stripe card (which is static — it’s all right there on the back of your card), the data involved in an NFC transaction is encrypted and dynamic, meaning it’s constantly changing.

As an example, let’s take Apple Pay, which uses a technology called tokenization to safeguard bank details. Here’s how it works:

A variety of different NFC-enabled payments are coming to market. For iPhone users, there’s Apple Pay. Android users have Google Pay and Samsung Pay as options. Some chip cards are even equipped to be “contactless” or “tap to pay.” These are more common abroad, however, and by and large haven’t made their way to the U.S.

A quick refresher on what’s happening here: The United States has moved toward chip cards (instead of magnetic-stripe cards) as the standard. These new chip cards are a lot more secure than the magnetic-stripe cards we currently carry, and have been proven to cut down on counterfeiting. Countries that have already made the switch to EMV (the U.S. is late to the party here) have seen a dramatic reduction in certain types of credit card fraud.

As a business, you’ll want to set yourself up to accept EMV soon. That means you’ll need a new point of sale terminal, because chip cards are dipped instead of swiped. You can get a payment terminal that accepts both EMV and NFC transactions to make sure you can accept all the latest, most secure forms of payment from your customers.

Mobile wallets like Apple Pay tokenize your bank details, meaning they scramble them up into something that’s unintelligible (and thus unusable) for fraudsters. What’s more, these tokens change every time an NFC transaction goes down, so the data is near impossible to isolate and extract.

NFC payments like Apple Pay are also locked down by the fingerprint technology built into the iPhone (you initiate an Apple Pay payment with Touch ID). Fraudsters may be tricky, but they can’t replicate your fingerprint.

We mentioned that everyone’s getting EMV chip cards. Which is a good thing, because they’re a lot more secure than magnetic-stripe cards. But what many people don’t realize about chip cards is that EMV transactions are actually pretty slow to process. They’re a lot slower than magstripe transactions, in fact.

What’s happening during an EMV transaction is that the chip in the card is talking with the processor to make sure everything checks out — which is a good thing. But the lag time is pretty noticeable, especially if you have a line waiting.

NFC transactions are much faster than EMV transactions — they take just seconds. And as people start to realize what it’s like to pay with chip cards (aka how slow it is), they’ll likely turn to mobile payments, especially as they’re just as secure as EMV. We’ve seen this pattern in other countries that have adopted EMV as the standard; the adoption rate for NFC-enabled contactless payments increased after chip cards were standardized.

As a business owner, it’s worth familiarizing yourself with how to pay with NFC as a customer.

For one, it’s always a good idea to be up to speed on where the payments industry is headed. And second, it’ll help you troubleshoot any issues your customers might have when they go to pay with their device.

Getting yourself set up to pay via your phone is relatively easy. Most mobile wallets use your phone’s camera to read the numbers on your credit card (which, as we mentioned above, become encrypted). If you’re an iPhone user and want to use Apple Pay, you can also sync up your iTunes billing info. (Check out our step-by-step guide on how to pay with Apple Pay here.)

To accept NFC mobile payments at your business, you’ll need to get set up with an NFC-enabled reader. But this doesn’t have to cost you an arm and a leg. The Square contactless and chip reader accepts both EMV and NFC payments, and is just $49.

Other readers found these tools helpful