If you’ve been to Whole Foods or Walgreens recently, you may have noticed people holding up their phones to pay. It’s likely they’re paying with Apple Pay. (And soon, small businesses everywhere will be able to accept Apple Pay with the Square contactless and chip reader).

But how exactly do you pay with Apple Pay? As a small business owner, it’s a good idea to get up to speed. Especially as more businesses (large and small) get on the Apple Pay train, more and more of your customers will want to pay with it. So it’s a good idea to be familiar with how it all works. (After all, every seller is also a buyer).

Below, we go through the basics of how to pay with Apple Pay in stores.

What makes Apple Pay so cool?

Apple Pay is Apple’s mobile wallet. It allows you to pay with your iPhone or Apple Watch at stores with just a tap. Apple Pay securely stores your credit cards, store credit cards, and rewards cards right within the app. When you go to pay for something, you can select which card you want to use, and then hover your phone on the NFC-enabled payment reader to check out.

What type of devices does Apple Pay work on?

In stores, Apple Pay works on the iPhone 6s and 6s Plus as well as the Apple Watch. The reason Apple Pay only works on these models is that previous models aren’t outfitted with NFC technology. The iPhone 6s and 6 Plus also have Touch ID (Apple’s fingerprint technology). Which is a good thing, because Touch ID (and also the dynamic encryption) is part of what makes Apple Pay so secure. Even if your phone is stolen, the thief won’t be able to get at your bank information. Apple Pay is an example of what’s called an “authenticated payment,” which is a lot more secure than a magnetic-stripe card payment, where the data is static and relatively unprotected. (EMV is also an example of an authenticated payment.) In an effort to cut down on credit card fraud (which is unfortunately rampant), the U.S. is moving away from magnetic-stripe cards and towards authenticated payments like Apple Pay and chip cards.

Where can you use it?

You can use Apple Pay at a number of large retailers across the country currently accept Apple Pay — places like Walgreens, Whole Foods, Petco, and Office Depot, for example. And soon, with Square’s new NFC reader, we’re bringing Apple Pay to the rest of the neighborhood so that everyone—not just the big guys—can accept it.

Is Apple Pay complicated to set up?

As a seller, it’s a good idea to familiarize yourself with what customers experience when they use Apple Pay. And the best way to do that is to try it out for yourself. To start using Apple Pay on your iPhone 6s or 6 Plus, open up Passbook. Then it’s time to add in the credit or debit cards you’d like to use for Apple Pay. If you already have a card associated with your iTunes account, it’s super-easy. You just add it to Apple Pay by entering the card’s security code. If you don’t have a card on file for your iTunes account, no problem. Just use the iPhone’s camera to take a photo of your card and fill in any additional info the app asks for (like your security code). After your card is verified, voilà — you can start using Apple Pay anywhere that accepts it. Apple’s site has a handy step-by-step guide for how to set yourself up with Apple Pay, if you need some more help.

So how do you use Apple Pay at stores?

Apple Pay is a contactless payment — meaning you can just hold your device near the payments reader to pay. The technology that underpins contactless payments is something called NFC (near field communication) — so you do have to be pretty close, usually a few inches or less.

To initiate an Apple Pay payment on your phone, wait until the light on the payments reader comes on. Then just hold your device up to the reader with your finger on the Touch ID button so it can scan your print. Once everything checks out, things are set in motion. If you have a number of cards on file, you can select your default card or choose another from the cards you have on file. And within a few seconds, the transaction is complete. Contactless payments like Apple Pay are by far the fastest way to pay these days. They leave both cash and magnetic-stripe cards in the dust. Apps also can use Apple Pay

You can use Apple Pay to pay for items with a single tap within apps (if you have one of the supported models). This is extremely convenient, because it means you no longer have to pull our your credit card and type in the number, your contact information, and shipping details.

If you want to pay for something in an app that accepts Apple Pay (the app will tell you if it does), just choose Apple Pay as your payments option. Then you trigger the transaction by using Touch ID.

How can you accept Apple Pay at your store?

You’ll need a new reader to accept Apple Pay. But it’s worth investing in for a number of reasons. First off, there’s security. Because Apple Pay is an authenticated payment, it’s safeguarded against fraud (as opposed to magnetic-stripe cards, which are easier to counterfeit). Secondly, more and more of your customers will soon be ditching their magnetic-stripe cards in favor of contactless payments like Apple Pay because they’re faster and much more convenient (think: no more wallets stuffed with cash).

You can pre-order the Square contactless and chip reader now. But before you set it up at your shop, make sure you know how it works on the customer end. That way if your buyers get stuck, you’ll be able to show them how to use it.

What are the main benefits of using Apple Pay?
Apple Pay is a much more secure way to pay than magnetic-stripe cards. Apple Pay also has two other key benefits: convenience and speed.

Are there additional charges when customers use Apple Pay?
With Square’s Apple Pay reader, your business pays just 2.75% per tap for Visa, MasterCard, Discover, and American Express. Swipe $100, see $97.25 in your bank account in one to two business days. There are no monthly fees, no commitments, and no surprises. 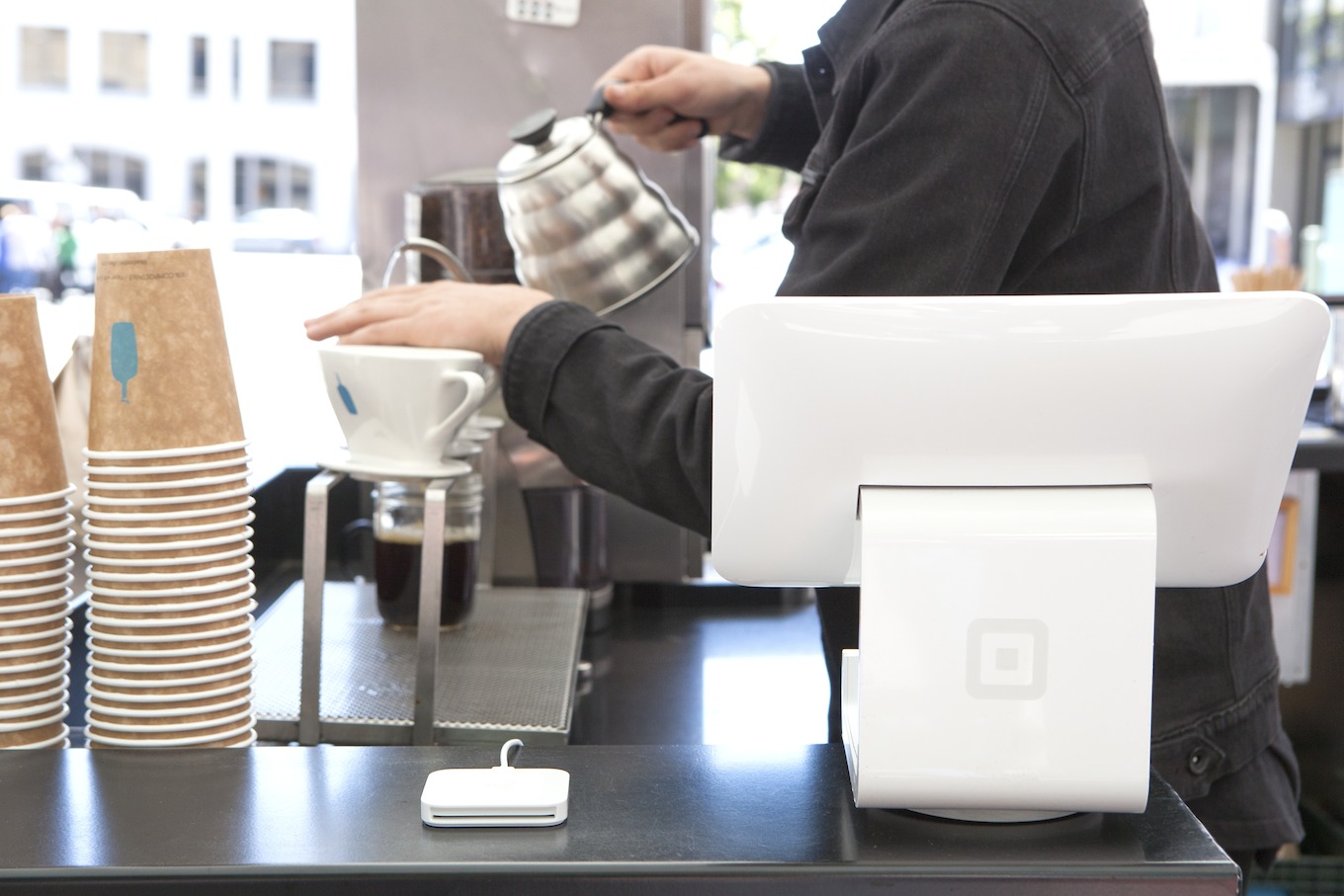 EMV vs. NFC—What’s the Difference?