Embracing more modern technology has helped sellers on the Falkland Islands to feel more connected to the rest of the world and their visitors, meaning they can serve and attract more customers every year. Two business owners who are benefiting from this initiative are Hattie and Kevin Kilmartin.

The Kilmartin couple are no strangers to travel, having worked at one time or another in places as far-flung as Russia, Switzerland, Outer Mongolia and South America. But it’s the Falkland Islands where they have now made their permanent home. Kevin originally travelled to the Islands to take a job for six months. 44 years later Kevin and Hattie are still there, having immersed themselves in life on the Islands and its animals more than anything. 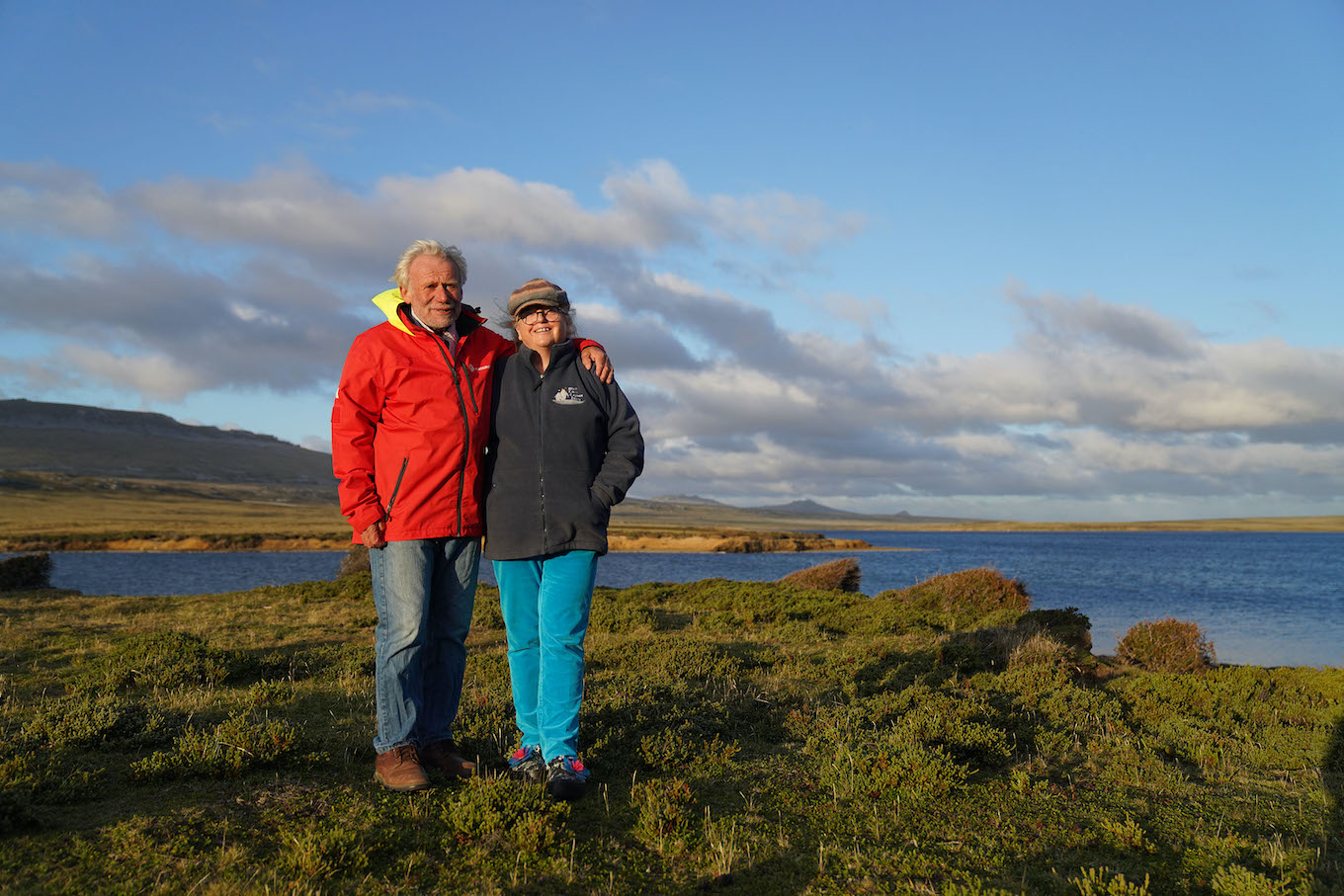 Together they settled on a sheep farm in East Falklands, just a 15-minute drive from the capital Stanley but a huge 35,000 acres of flat fields that drop right into the ocean. Initially, they farmed sheep, using their herds to produce beautiful, soft and strong yarn. In fact, their Bluff Cove business can claim to have created the first-ever Falkland Islands tweed. Hattie now makes three varieties of tweed inspired by the muted yet distinct colours of the Islands, exporting the wool from their farm to mills in Scotland before dyeing and finishing the product herself, by hand. 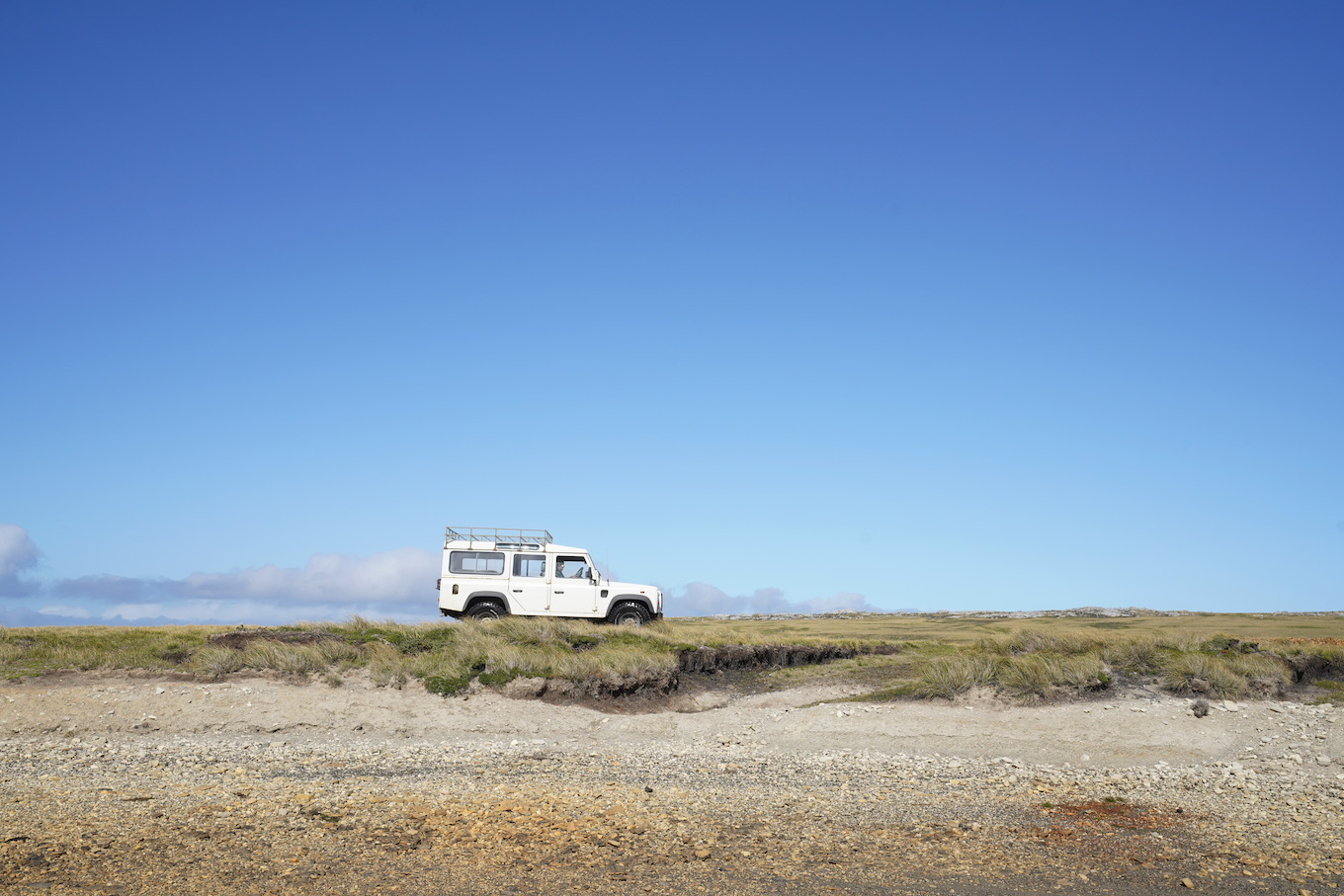 Building a business on the Falklands

It wasn’t until the tourism trade started picking up pace on the Falkland Islands, however, that Hattie and Kevin realised that they were well-suited to doing more with their farm, than just farming. Being so close to the capital and its harbour means that the day trips from cruise ships that started stopping in the early 2000s can easily reach them. More importantly, though, Hattie and Kevin’s farm was not just an incredible natural heritage site but a short drive to the coast, which is full of the Island’s wildlife, in particular, penguins.

“We are jam packed with wildlife we’re very lucky. Every day it’s something different.” 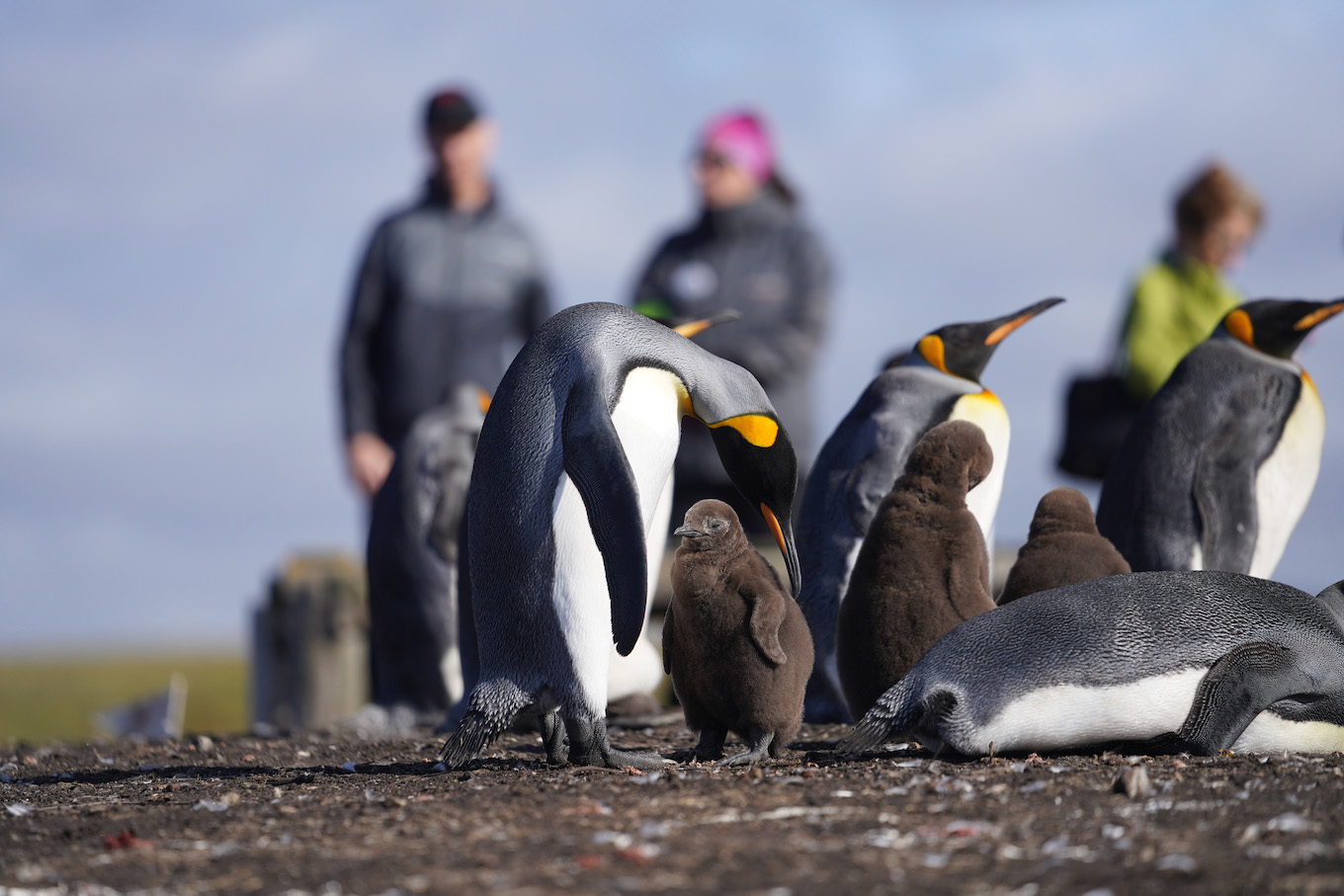 Kevin started taking tourists down to Bluff Cove Lagoon by himself, giving guided tours from the farm and back and so, Bluff Cove Tours was born. The long strip of beach on the east of the island is home to more penguins than there are humans living on the whole archipelago. This unspoiled site is home to 4,000 Gentoo penguins, with their flamboyant orange beaks and crisp white patches like feather caps, who come to the Falkland Islands to breed. The tiny chicks then hatch right there, on the shore and learn to swim in the lagoon before venturing off to sea. As well as this, the cove itself is home to 30 breeding pairs of majestic King penguins, loud and stout sea lions who hunt on the beach and even pods of dolphins who play in the sea. This mix of natural wildlife and the proximity that the Bluff Cove farm allows, make it one of the last spots on Earth to get this close to nature.

When Kevin first bought the farm, it was cut off from not just the world but even the rest of the island. They were completely off the grid, with just an antique wind-up telephone system to rely on for contact. With modern technology like broadband internet coming to the Islands in 2005 however, the couple and their business have flourished even further. Powered by the same passion, but with new ways of expressing it, they have expanded from providing tours in person to run a fleet of sightseeing vehicles, a cafe, shop, and museum, all on-site.

“We love the Falklands and want to show it off to everyone. Even if they’re only here for a few hours we want guests to go away feeling they understand the magic of the Islands.”

The business is still a very personal endeavour for the pair, it is run from their home after all. Aside from busy tour days, where they can have a team of 25 on hand to help,, Hattie and Kevin run the whole business themselves. On a normal day, Hattie is baking cakes and preserving jams for the cafe, as well as booking tours, and operating the till in the shop. 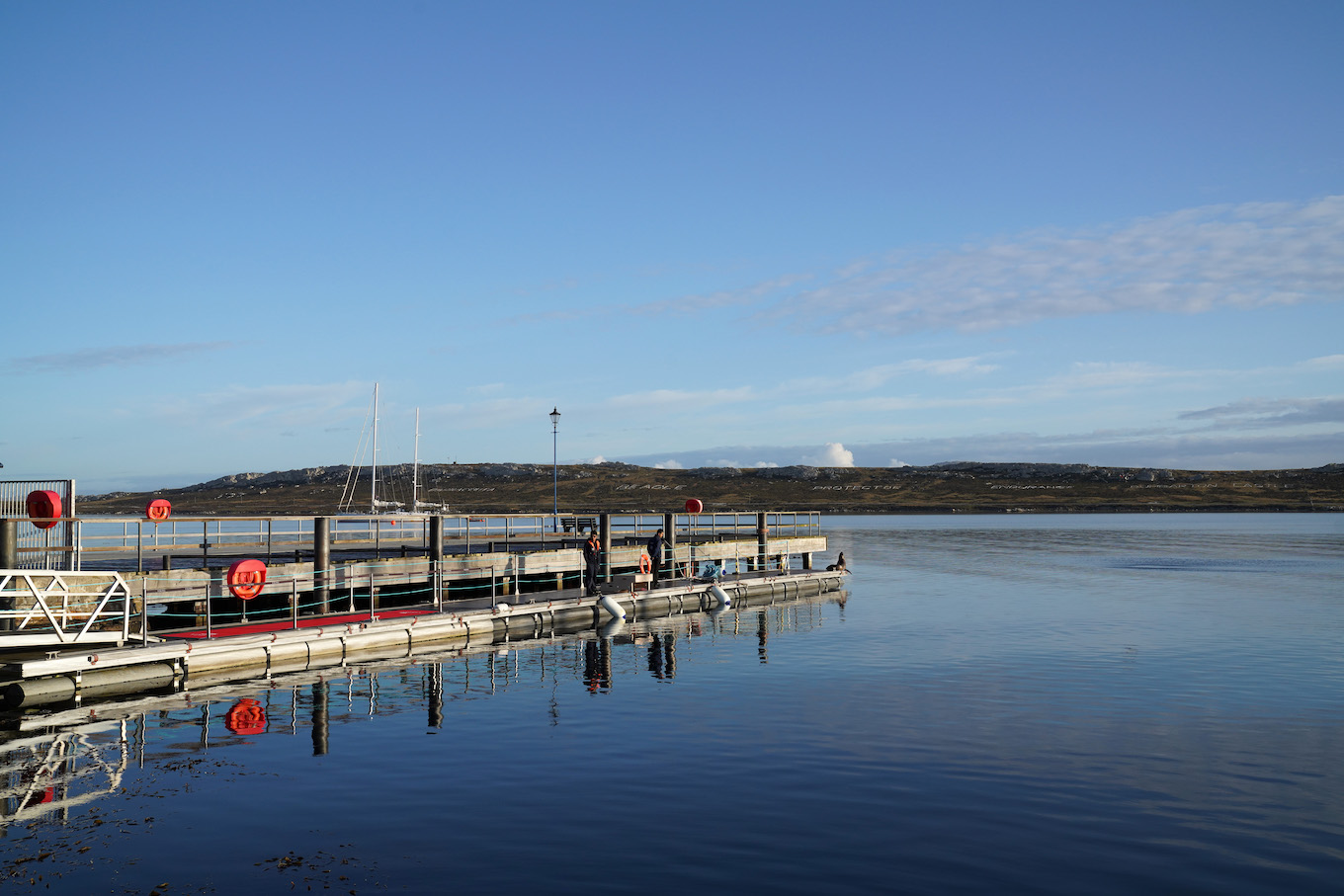 Embracing the challenges on Islands

While being online makes things easier to some degree, the beautifully remote location of their business is itself a challenge. Deliveries to the Islands from the UK can take up to three months, which is an issue when they run out of ingredients for Hatties’ baking. Luckily though they can rely on visitors to bring over lemons and other fruits for cakes and jams, but the pair are not so lucky with bigger issues. For instance, if some equipment breaks, either at the farm, shop or cafe, they largely have to learn to fix it themselves, or wait for parts to be delivered, which may take a while, or not at all with the Island’s vastly unpredictable weather.

Even when on the island, their remote location, tucked away from the nearest towns, can be a challenge too. The portacabins that they built the cosy, beachside cafe from had to be sourced and transported to their site on Bluff Cove. Taking these on the 15-minute journey from the harbour, perched on the back of a trailer, pulled by a tractor, proved a lot more complicated and stressful than first thought. Although most guests will think it well worth it for the warm drinks and cakes that now accompany the stunning views.

“It’s a great honour working for ourselves. Sometimes it’s stressful and exhausting but we wouldn’t want it any other way.” 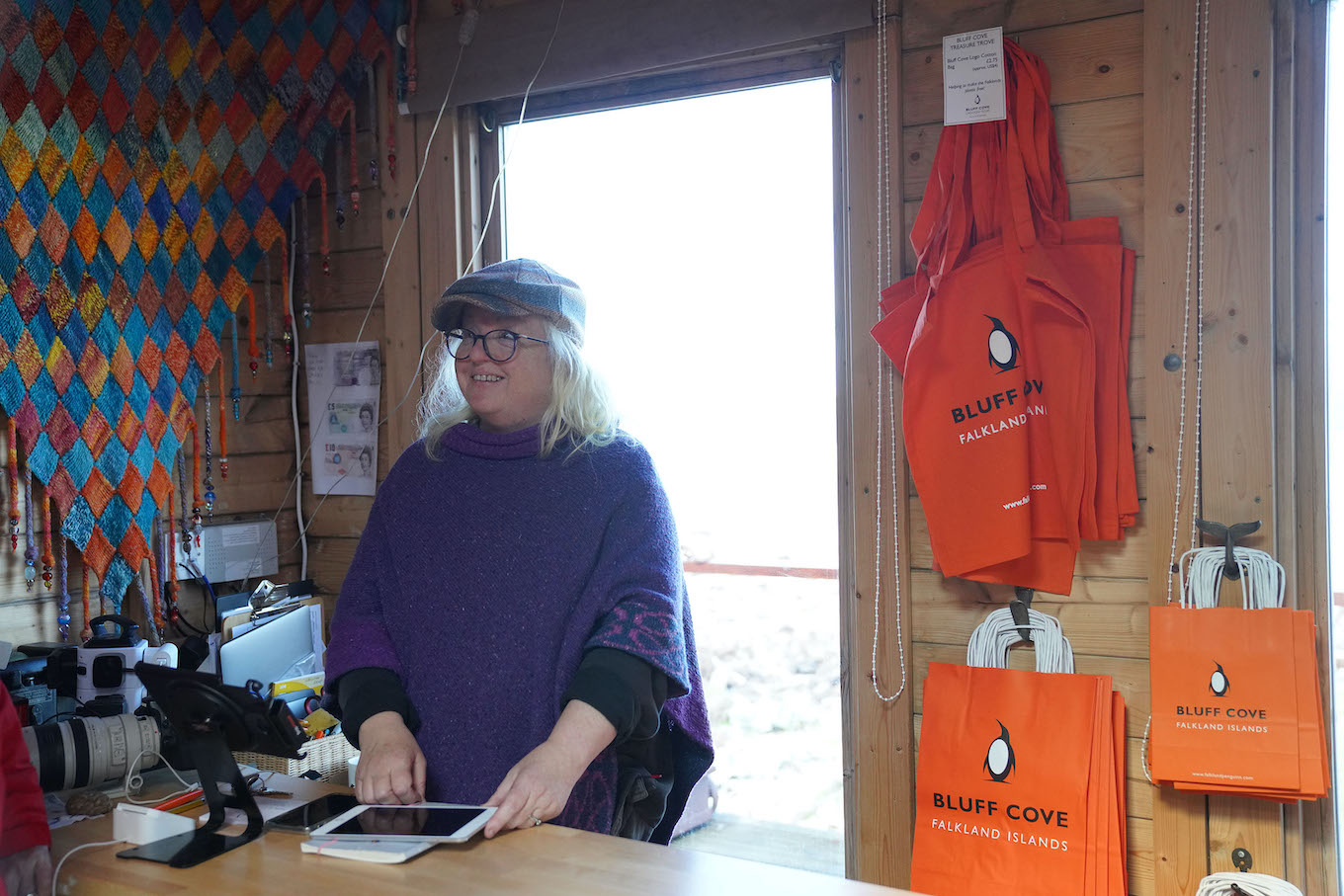 How Bluff Cove is shaping its future

But being more connected digitally, thanks to broadband and the work done as part of the initiative by Square, has helped the business massively in increasing its tourism trade. Where previously they were reliant on cash payments and had to manually accept different currencies from the nationalities that would visit, they can do it all through card payments. With Square software and hardware in all their premises, they can now accept chip and PIN, contactless and even Apple Pay and Google Pay payments from all tourists, whether they come from the US, Australia, China or Japan.

All in all, 80% of annual sales for the Bluff Cove businesses are made through Square. Hattie and Kevin have even found that the unexpected benefit of being able to have tourists pay by card is that it encourages them to spend more. Largely because now they don’t have to take the once necessary trip to the other side of the island to withdraw cash!

“Everyone is so flabbergasted that you can come to a penguin rookery at the bottom of the world and pay by card.”

With tourism to the Falkland Islands affected by the current coronavirus pandemic, Bluff Cove is not planning on offering tours this year, and instead are focusing business efforts on preparing for the 2021 season instead. Hattie and Kevin have spent much of this year working on resurfacing their local road network, hoping to be able to take more tourists at a time to the cove on buses. As well as this, the pair are looking after their sheep, devising the menu for their new pop-up cafe and planning an extension for the gift shop, which they say is needed as they take so much more money thanks to Square. Life might be remote on the Falkland Islands but it’s far from quiet.