One of the hardest hit industries during COVID-19 was the music industry. All of a sudden, live gigs were cancelled, international acts postponed their shows indefinitely, and musicians were left wondering what lay ahead. But the downtime meant that suddenly, innovation needed to happen, and musicians and merch sellers began to brainstorm ideas to boost online sales. In fact Jim Sewell, Managing Director of Jungle Merchandise, recently rolled out contactless merch selling, using QR codes, in partnership with Square at Ball Park Music’s latest socially-distanced gigs in Brisbane.

We spoke to Jim about the future of merch selling, and how COVID-19 will impact the Australian music scene moving forward.

How did you originally get into merch selling?

I grew up in London, in the UK, and used to always go to gigs in Camden. I always used to see people selling merch at gigs, and thought that would be a cool way to get into shows for free! I knew a couple of guys who did it, and they’d always get me into shows, and from that, met a guy who worked at a company in Camden, and started going in and helping out a few days a week, working with a lot of really good bands.

Later I met some Australians who also ran a merch company at South By Southwest. They asked if I wanted to come and work in Sydney and I thought, why not? So I came over for what I thought was going to be a year, and now I’m here 10 years later with my own merchandise business.

Did you notice much difference between the UK and the Australian music scene?

Yeah - huge difference! There are a lot of amazing artists over here, but unfortunately because it’s so far away, only the top manage to break out of Australia. It’s really cool because there’s this huge scene, and Australians are in love with these bands, but unless you’re here, you wouldn’t necessarily know about 70% of them.

It’s a really great scene. We’re very lucky - or were very lucky - that the festival scene is really strong here, so we got so many amazing international acts to come and play, and hopefully will again! For instance, Splendour In the Grass, Beyond the Valley, Falls and all of these incredible festivals that are buoyed along by the amazing Australian music scene.

Before coronavirus, what was the biggest challenge you faced when selling merch?

70-80% would get sold at gigs. That’s where the fans were most likely to engage and where you see the best returns for the bands. For the bands, their management and the merch companies, the focus has always been selling merch at live shows, with online selling playing second.

How did you cope when COVID-19 went down and live music was cancelled?

At first we kind of panicked, like everyone I think. A lot of our clients are based overseas, and can’t tour at the moment, so we were reaching out to them and offering to set up an online portal or store for them to sell their merch. With the collapse overnight of touring, everyone was looking for a new solution for how to engage with fans, and keep a dialogue going between the bands and their fans, now that they couldn’t get that connection from live music. A few of the bands we were working with really picked it up and ran with it, and got very creative. We came up with ideas together and put our energies and efforts into online. While it hasn’t replaced touring, it has definitely allowed us to continue operating as a company.

You recently experimented with using QR codes to sell merch at Ball Park Music’s gigs. How did you go about setting this system up?

We knew early on that we wanted to do some sort of socially-distanced merch vending, and we searched for a platform that could meet our requirements. We researched a few different ideas and solutions, like some music-industry specific platforms and some restaurant platforms. I was talking with a friend of mine, who mentioned Square, so I reached out. They got what I was trying to do, and we changed a little bit on the backend on the store, but with very minimal changes to the actual platform itself, and we managed to get it to a place where if a punter scanned the QR codes on their table at the show, we could get a decent representation of a merch stand on their tablet or phone.

When the shows came around, we printed and laminated 30 different table cards, and put them on people’s tables at the gig. 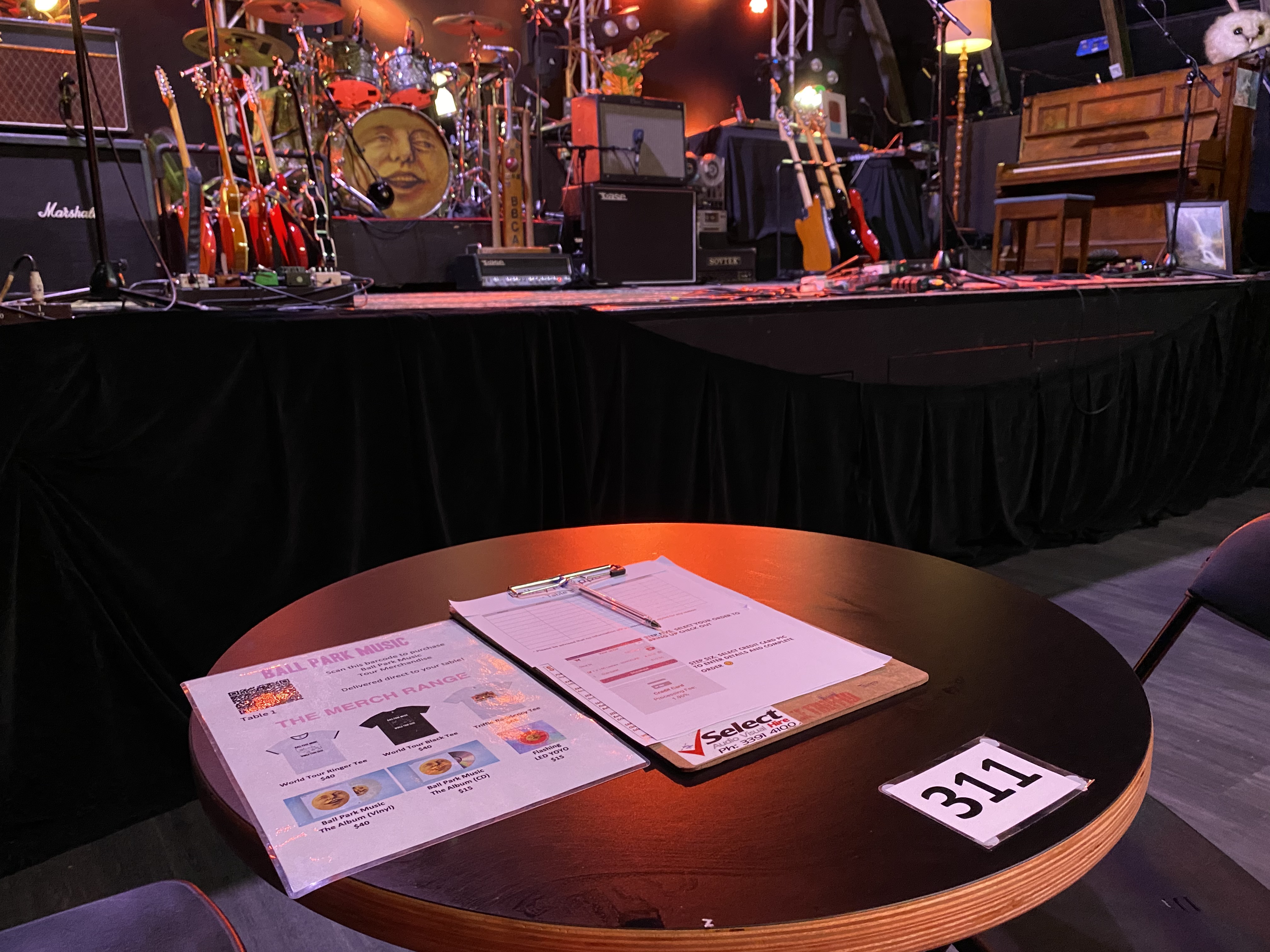 The real gem of the system was that when people scanned their QR codes and got a brown paper bag a la ‘Uber Eats’ delivered to their table, the people on the next table got FOMO. So we saw a real snowball effect from the first couple of people who were ordering, and it worked really well. People loved the system - it was easy for us to operate, it was great for us to be able to keep track of what had gone out, and gig-goers really enjoyed using it too.

Will you try it again, at other gigs?

We’ve actually had a few bands get in touch and ask us about doing it. The beauty with the Ball Park Music show was that it was 13 gigs in one venue - dead easy. One guy to train up, one set of laminates to put on the table, one set of table numbers. But, I think as we go into more gigs that have to be produced and set up in this way, we will definitely continue to use this system. Once we have some of our on-the-road staff trained in it, it’s an easy system for them to get their heads around as well. There’s a bit of a paradigm shift in the way that you do things, but as with anything that’s worth doing, there’s always a bit of a learning curve. 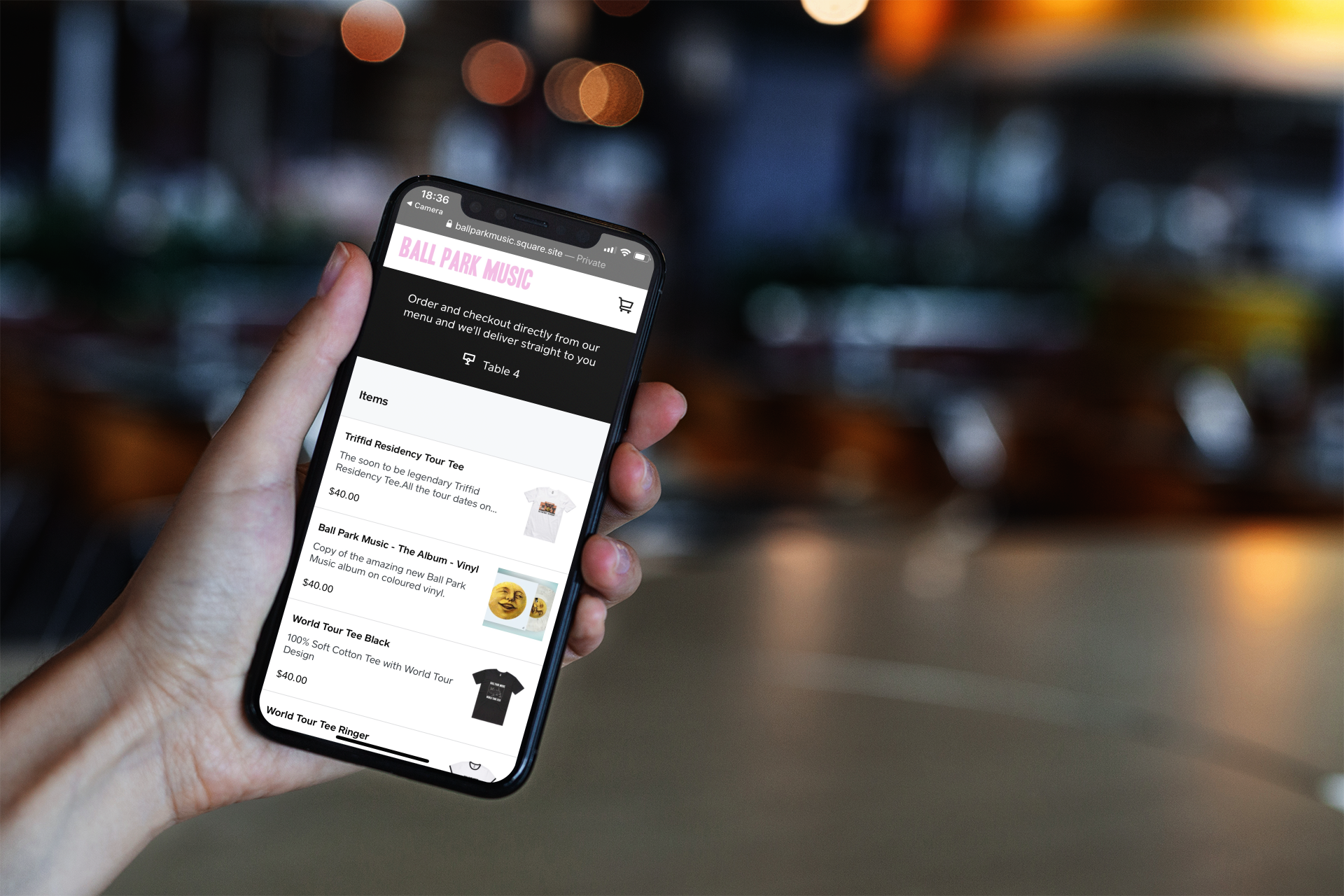 How do you think COVID-19 will transform the music industry moving forward?

It will put a stop to any international touring, I think for at least the next year. But - I think that does present a great opportunity for Australian artists and the Australian music scene to get behind itself. You’re already seeing Australian-only festival line ups - and that has the effect of really pushing talent to the top, so they’re not overshadowed by international bands. They’re showcased for being what they are - and that is world class international acts in their own right. So I think in that respect, we’re going to see a burgeoning of that scene. I also think that when we can get out and see shows, people will be very keen to get out and show their support and have a dance.