Cooking up a storm

For owners of the award-winning Birmingham street food vendor The English Indian, their business isn’t just a job, it’s a labour of love. Anna and James have poured the passion, enthusiasm and adoration for India into their every dish. Their travels around India, as well as their home-grown love of food, are reflected in the unique blend of flavour and spice they offer. Fusion dishes as delectable as ‘Indian Fish and Chips’ – that is, fresh pakora battered cod with chat masala seasoned chips – are proof of the culinary creativity that’s at play in The English Indian’s kitchen.

From a side project James started in 2015, this taste-bud-tingling business is now the couple’s full-time job. They even walked away with first place at the Central heat of the British Street Food Awards back in June, championed by the all-important People’s Vote. The next stop for the couple? Manchester, where they will go head to head with the country’s leading innovators of food at the British Street Food Awards in September. After that, they hope to get themselves a set of wheels and turn their humble food stand into a rocking food truck. 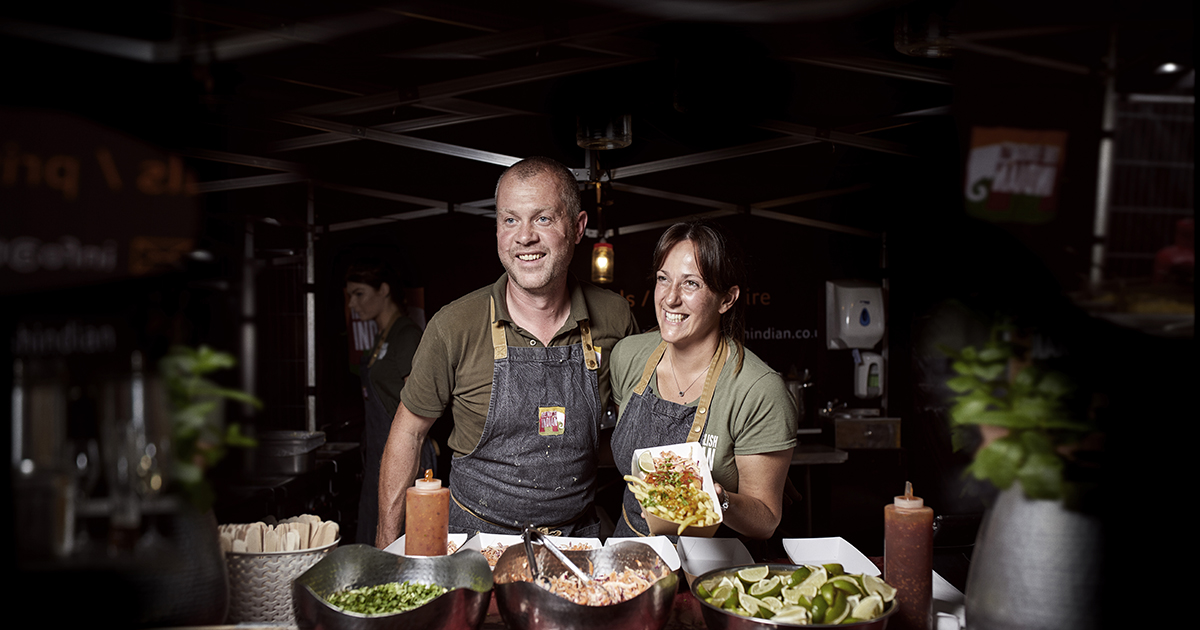 The English Indian is a roaring success thanks to the passion of its owners, the enthusiasm of its customers and the smooth running of its day to day sales. With Square, they found that taking card payments didn’t have to mean taking time away from their foodie passions.

Anna and James signed up to Square after running their business as a cash-only venture. Unsurprisingly, they found cash to be a less than ideal route for a burgeoning business. With ever-increasing admin and trips to the bank after a busy day of serving hungry punters, they needed a change. James happily reflects, “The process with Square was seamless, we signed up in one day and the Reader arrived two days later.”

The addition of Square to their daily transactions has transformed the way they work and taken away the worry of hunting down every last penny. Their money is safe, secure and where they need it to be, “We always receive our money the next working day after transactions are taken, instead of having to wait almost a week as with other companies in our previous businesses.”

And it’s not just the people behind the counter of The English Indian who have fallen in love with Square, the customers on the other side enjoy the convenience of paying by card, and as James says, the Square reader makes a great impression, “The customers love it too – it’s always great seeing the look on their faces when being presented with the Square reader or iPad screen.”

James and Anna aren’t newcomers to owning a business. Before The English Indian they ran a clothes shop, and since growing from a one-manned tandoori oven in their back garden, The English Indian has enjoyed stints as a pub curry night, a traveling pop-up and is now an ordained member of the Digbeth Dining Club, whose market events sees the couple serve up to 300 servings on market days.

With an increasingly impressive portfolio of events, locations and happy diners, The English Indian is becoming something of a trailblazer in the foodie arena, not least because of their secret weapon: Square. James remains shocked that other food vendors haven’t recognised the transformative power of a card reader,

“We’re always being told that we are the only company at food festivals taking card, which we can’t understand as it is cheaper and easier using Square than it is to deposit cash.” Has it all been smooth sailing? Yes, in fact, as James cheerfully concludes, “We haven’t had any problems at all.”

And when the last helping is served and the washing up is done for the last time? Anna and James say they’re heading to the country that started it all, to retire in India.

The English Indian can be found at markets and festivals across the country, including Digbeth Dining Club in Birmingham. To find their current location, follow them on Twitter at @englishindian1.