Square/Gallup Survey: Joe Biden is the Top Choice for the Democratic Nomination Among Small Business Owners

However, Michael Bloomberg is the only Democratic candidate favored by more small business owners than President Donald Trump in the general election

SAN FRANCISCO - According to a survey conducted by Square and global analytics firm, Gallup, American small business owners are closely following the 2020 Presidential election and overwhelmingly plan to vote in November. With 60% paying “a lot of attention” and 30% paying “some attention,” this key group of voters, which account for more than 30 million businesses across the country, is more than highly engaged: 97% say they will likely cast a vote in the 2020 Presidential election.

Even though small business owners tilt more Republican (40%) than Democratic (33%) or Independent (26%), they are closely divided in whom they would support in the general election. By comparison, U.S. adults nationwide are less likely to identify as Republicans, according to Gallup. 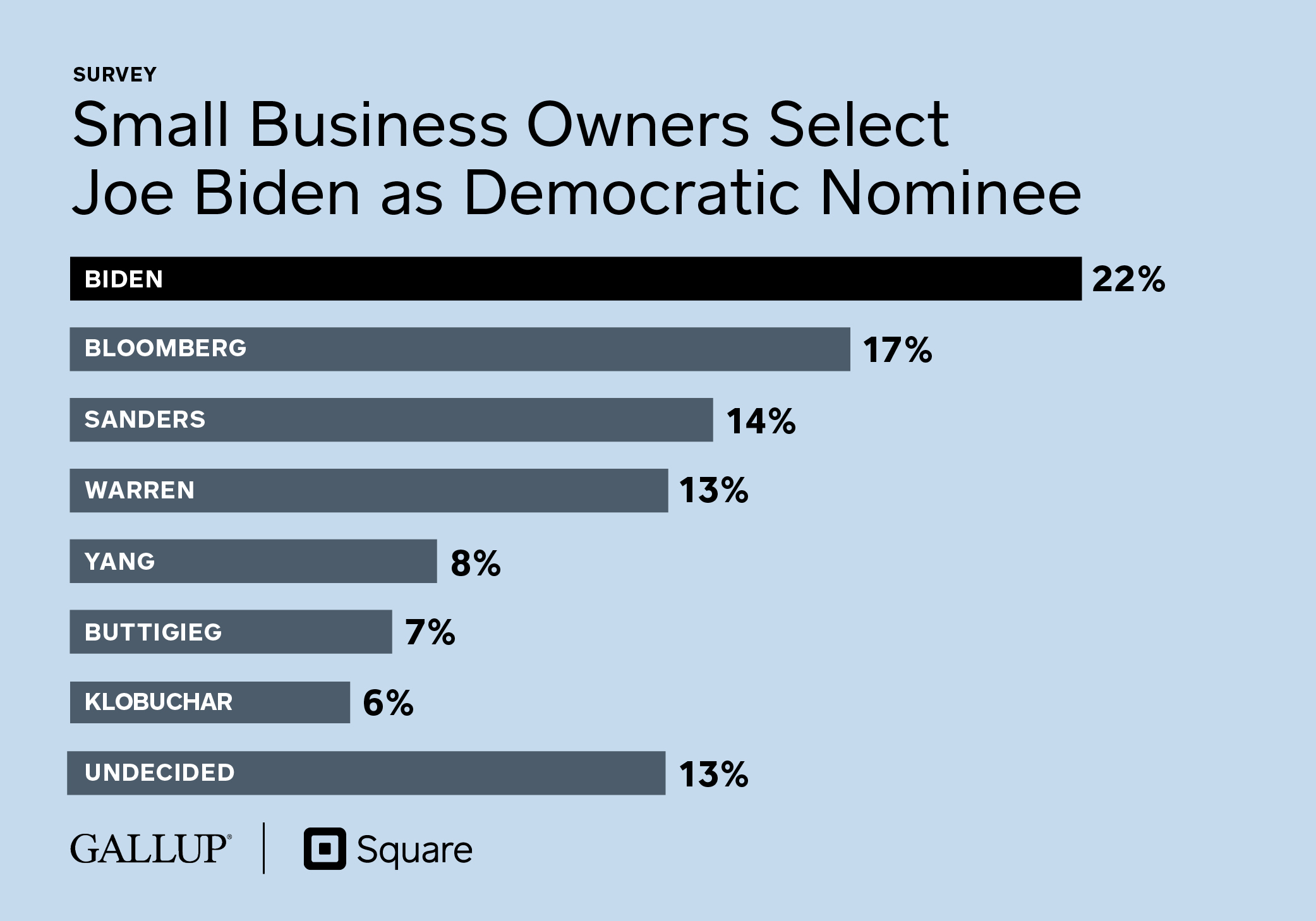 General Election Candidate Preference
Sixty percent of small business owners surveyed from January 15 to the 24, approve of the job President Trump is doing in office, and 52% say that if he wins the general election in November, their business will be better off. Conversely, 41% say the same for the Democratic nominee.

Here is a breakout of the general election head-to head-vote: 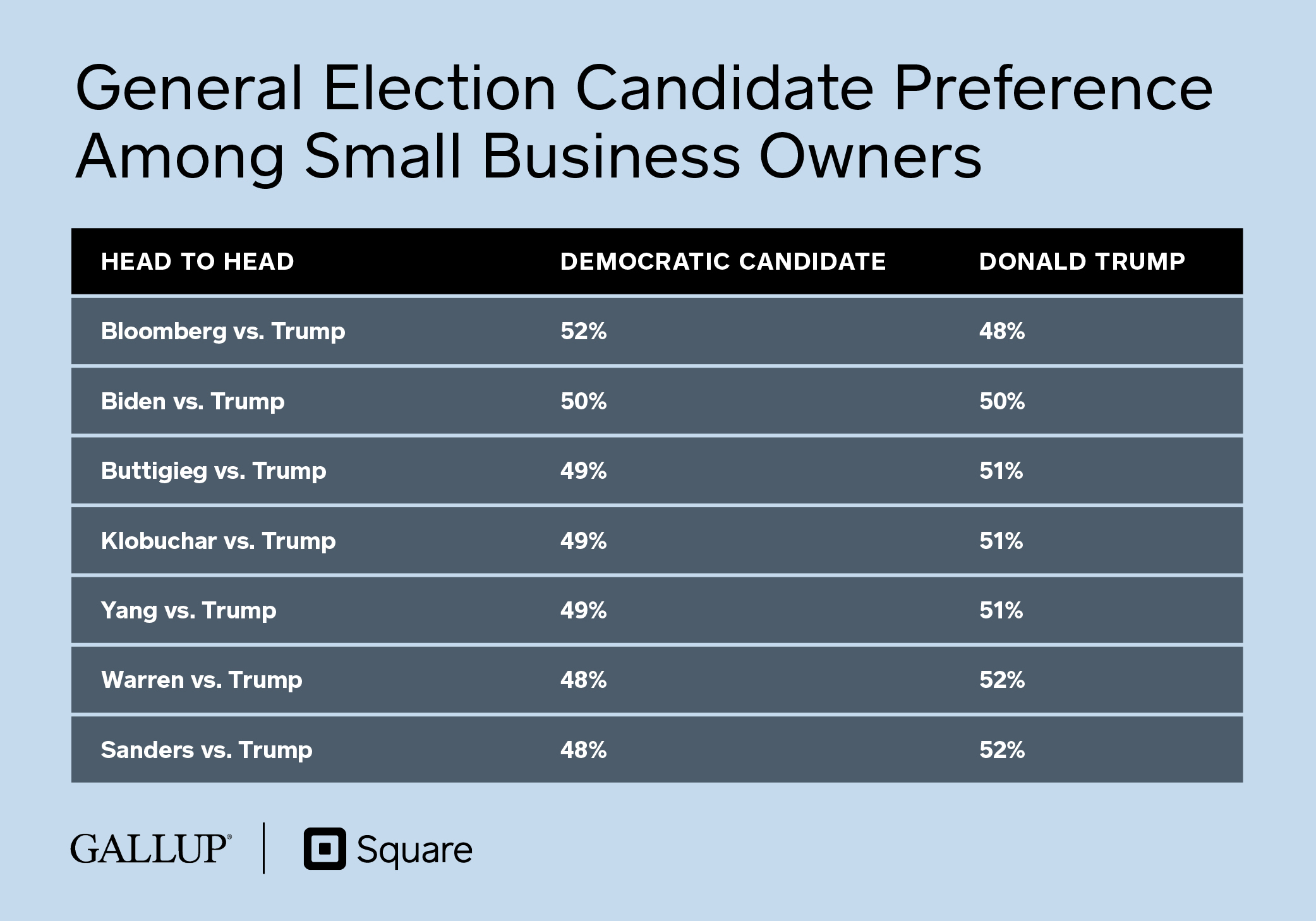 Economic Conditions
When asked about the state of the economy, 77% of small business owners say current economic conditions in the US are good, however 69% say it is likely that the nation will face an economic recession sometime in the next 18 months. One-third (33%), say U.S. trade tariffs have mostly hurt their business in the last three years, 40% say they have had no effect and 27% say they have helped.

Key Election Issues: Taxes, Government Regulations, and Healthcare
Among six key election issues, 32% of small business owners say taxes present the greatest challenge to their business, while 21% say government regulations, and 20% say healthcare. Seven in 10 small business owners say the cost of healthcare has impacted their ability to hire or retain employees, and 69% say their business benefited from the increased small business deduction that resulted from the 2017 tax reform law.

Methodology
Results for this poll are based on online surveys conducted by Gallup on Jan. 15-24, 2020, with a sample of 1,234 small business owners, aged 18 and older, living in all 50 U.S. states and the District of Columbia. Respondents were interviewed via web in partnership with Dynata. All respondents own a small business with annual revenue between $50,000 and $25,000,000. The national sample was weighted by revenue to ensure the sample was reflective of respondents across the revenue range.

About Square
Square, Inc. (NYSE: SQ) revolutionized payments in 2009 with Square Reader, making it possible for anyone to accept card payments using a smartphone or tablet. Today, we build tools to empower businesses and individuals to participate in the economy. Sellers use Square to reach buyers online and in-person, manage their business, and access financing. And individuals use Cash App to spend, send, store, and invest money. Square has offices in the United States, Canada, Japan, Australia, Ireland, and the UK.

About Gallup
For more than 80 years, Gallup has been a recognized leader in the measurement and analysis of people’s attitudes, opinions and behavior. While best known for the Gallup Poll, founded in 1935, Gallup’s current activities consist largely of providing marketing and management research, advisory services and education to the world’s largest corporations and institutions.