More than seven in 10 small businesses describe themselves as confident about the UK business environment, despite economic uncertainty and worries over Brexit. That’s one finding of a new report released today by Square, which surveyed 1,200 small business owners nationwide.

Of these small firms, 71% said they are “confident” or “very confident” about the business environment, including their ability to hire, expand and invest. On average, they expected their company to grow by 29% over the next 12 months. This number will see the UK’s 5.3m small businesses outperform the wider economy, which is currently growing at 2% according to the Office for Budget Responsibility.*

The study also created a ranking of cities based on their growth potential for small businesses, looking at regional differences including business confidence levels, growth expectations, technology adoption and infrastructure. Belfast came out on the top, with Nottingham and Cardiff in the runners-up spots. The UK’s capital city, London, appeared 10th out of the 15 cities ranked.

Commenting on the report findings, Sarah Harvey, UK Lead for Square, said: “Much of the conversation about economic growth focuses on London and big business, but, interestingly, this research shows that it’s small businesses from all around the UK that are driving economic optimism.

“One in three Brits works for a firm with fewer than 10 employees, and these businesses are a critical part of the UK economy. However, these are companies that have historically had less access to tools and resources than their larger counterparts, making it harder for them to grow.”

“This study shows us that small business owners are feeling relatively confident about their growth potential, even during uncertain economic times. In part that’s thanks to the growth of technologies that level the playing field so businesses of all sizes and in all parts of the country have a fighting chance of success.”

Square’s report overall provided a positive picture of each city’s small business sector and good potential for future growth. Small businesses in Belfast expected, on average, to grow 41% in the coming 12 months – substantially higher than the overall UK rate.

Most revealing was the untapped potential to use technology to boost small business productivity and growth across the UK. The opportunity is substantial, as in most cities fewer than half use technology like contactless payment systems, internet-based communications tools, or software for point of sale services. Businesses in Liverpool demonstrated the biggest appetite to start using this new technology, with 49% of them considering deploying new solutions within the next 12 months.

Support for small businesses is strongest in the South of the UK with the best broadband speeds and access to a range of SME networks. Bristol has the fastest broadband speeds of the 15 cities, according to Ofcom, with an average of 33.8/Mbps. While London leads for the number of start-ups established last year, Norwich actually had the most start-ups per head of population, at 167 per person.

Emma Jones MBE is the founder of Enterprise Nation, the UK’s leading small business community and campaigning voice for small business. She commented on the study: “This country has such an exciting culture of entrepreneurship, so I’m not surprised that this study shows SMEs to be feeling confident about their future growth.

“However we also know that setting up and running your own business is extremely challenging and incredibly hard work, especially with the current pace of technological change and innovation. With the uncertain economic conditions ahead it’s more important than ever that business owners have access to the support, tools and information they need to thrive, and that as consumers, we all continue to support local and independent businesses across the UK.” 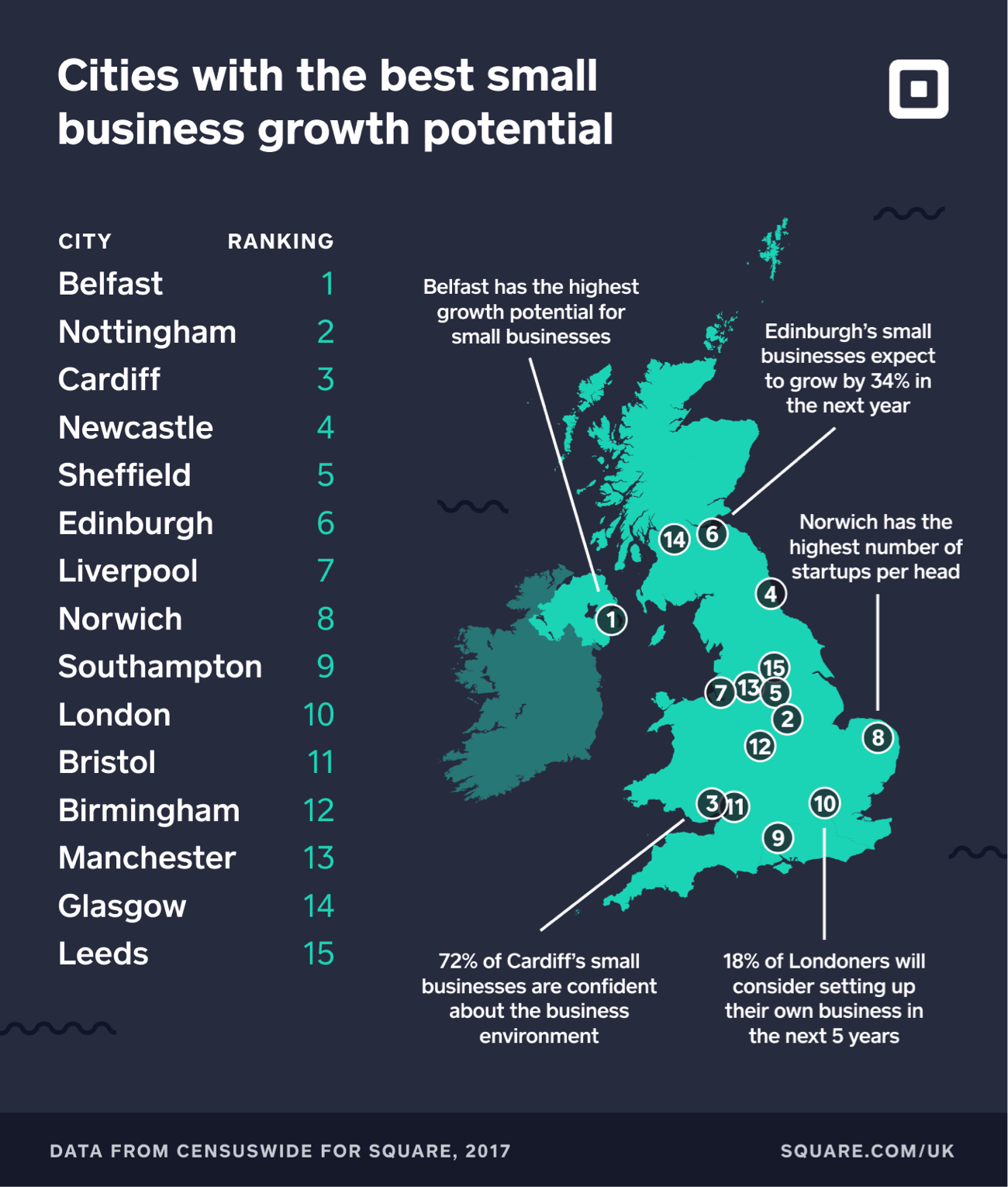 *Taken from Office for Budget Responsibility.
**Square commissioned a nationally representative survey of 2,044 consumers and 1,202 owners of small businesses around the UK, conducted by Censuswide between 15 - 24 August 2017.