Carol Paz and Luis Morais each took different paths to successful Miami retail businesses, but both of their stories are rooted in a lifelong passion for handcrafted objects.

Paz is the owner of Paz Y Luna, a business that sources handmade accessories from around the world to sell at local markets. She grew up in Honduras watching her grandmother craft straw hats at home to sell at the farmer’s market. Even though Paz never learned how to make the hats herself, she always remembered the beauty of the product and the process.

Morais has been obsessed with jewelry from the start. He started collecting early in life, and as a child he loved asking his father if he could help buy pieces for his mother. After initially studying to be an engineer and going into international business working with textiles and fabrics for designers across the world, Morais transitioned into starting his own luxury jewelry line that is entering its 21st year of business.

Here are their stories of success, challenges, and resilience in their own words, which have been edited lightly for length and clarity. 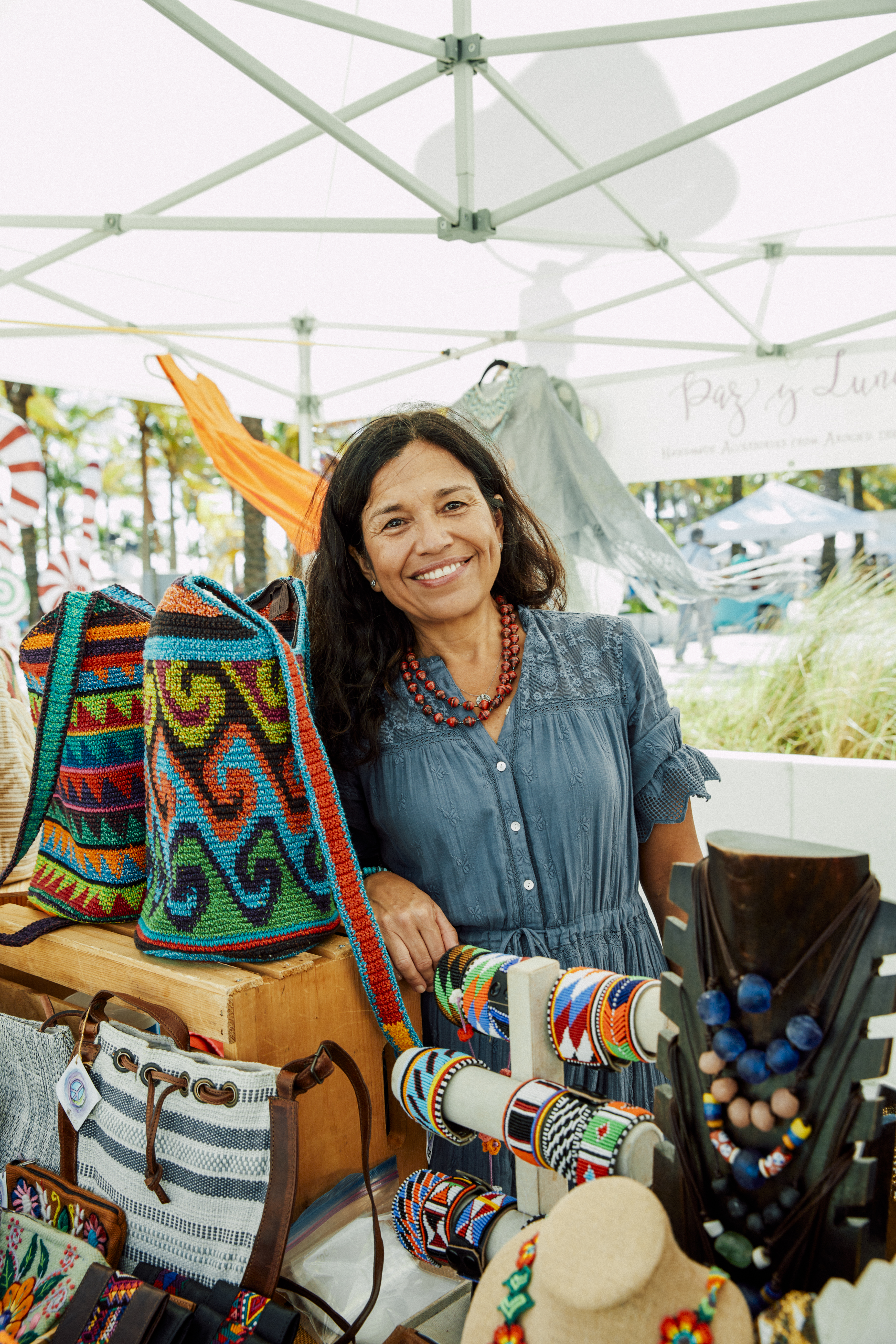 I moved to Miami in 1990 from Honduras when I was 19, and I have always loved everything that is handmade, different, and colorful. I made my life here in Miami. I got married and have two children who are now 18 and 16. I was even able to earn my business degree from Florida International University while raising my kids. When my kids were of summer camp age, I realized how expensive that all was. I did some planning and decided on doing adventures with them instead.

Every year, I picked a foreign country and I would rent a little house. With the kids, I would visit various markets and purchase artisan quality products. The idea of the business came from those trips and from my husband, Chris, who does video production. Every time he traveled to a country, he would bring me a little something, like a necklace or a bracelet from Kenya. All the gifts he brought home for me were handmade. Every time that I wore one of them, various people would say to me, “That’s so cool. Where did you get it?” So I started asking him, “Can you bring me merchandise like the gifts you give me, so maybe I can start selling them?”

My son designed the logo for the business. He was 10 years old at the time. The name was my daughter’s idea. On every trip moving forward, we would go to markets and bring products back from other countries. I started growing little by little, selling at local markets here in Miami.

Over time, one of the things that I have been able to do is connect with the artisans directly. I’ve been able to grow and keep these relationships. Now, most of the time I order directly from them. This is my business, but it’s also about helping the artisans. One thing for me that’s important is for them not to lose the art of making handmade artisan products. That, for me, is important because I felt the craft of making straw hats was lost when I lost my grandmother. She was the last one in our family who made those straw hats, and I didn’t learn how to make them

The last trip I went on was two years ago to Ecuador, before the pandemic, but this year I have trips coming up. I’m going to Peru to visit and purchase merchandise from some of the artisans in the area. I take pictures of the artisans and place them on the tables at the market so customers can see who made their product. The farmer’s markets became more popular during the pandemic because people wanted to shop outdoors and my sales increased. I have done a lot better these last two years than what I have done before because I think people are more happy to be outdoors than being inside in a mall.

One challenge I face is shipping costs. My product is one of a kind, it is not in bulk, which drives up costs. One piece doesn’t resemble the next. I have a shipment on the way from Kenya, and it’s heavy. I’m going to pay $1,000 for this shipment. I still have a lot of merchandise sitting in my inventory, but one of the advantages is that if it doesn’t sell, it doesn’t go bad. I have it there, and eventually, it will sell. So that’s the way I see it.

My inspiration and drive to build this business is to help and preserve the many skills of these artisans. This also has been a great experience for me and my family. My daughter is off to college this year, majoring in design at the Fashion Institute of Technology in New York. She wrote an essay for her application about how going to these markets and seeing different textures and artisans at work really inspired her. That, for me, has been my happiest achievement. Even better than growing my business is for her to have that inspiration. 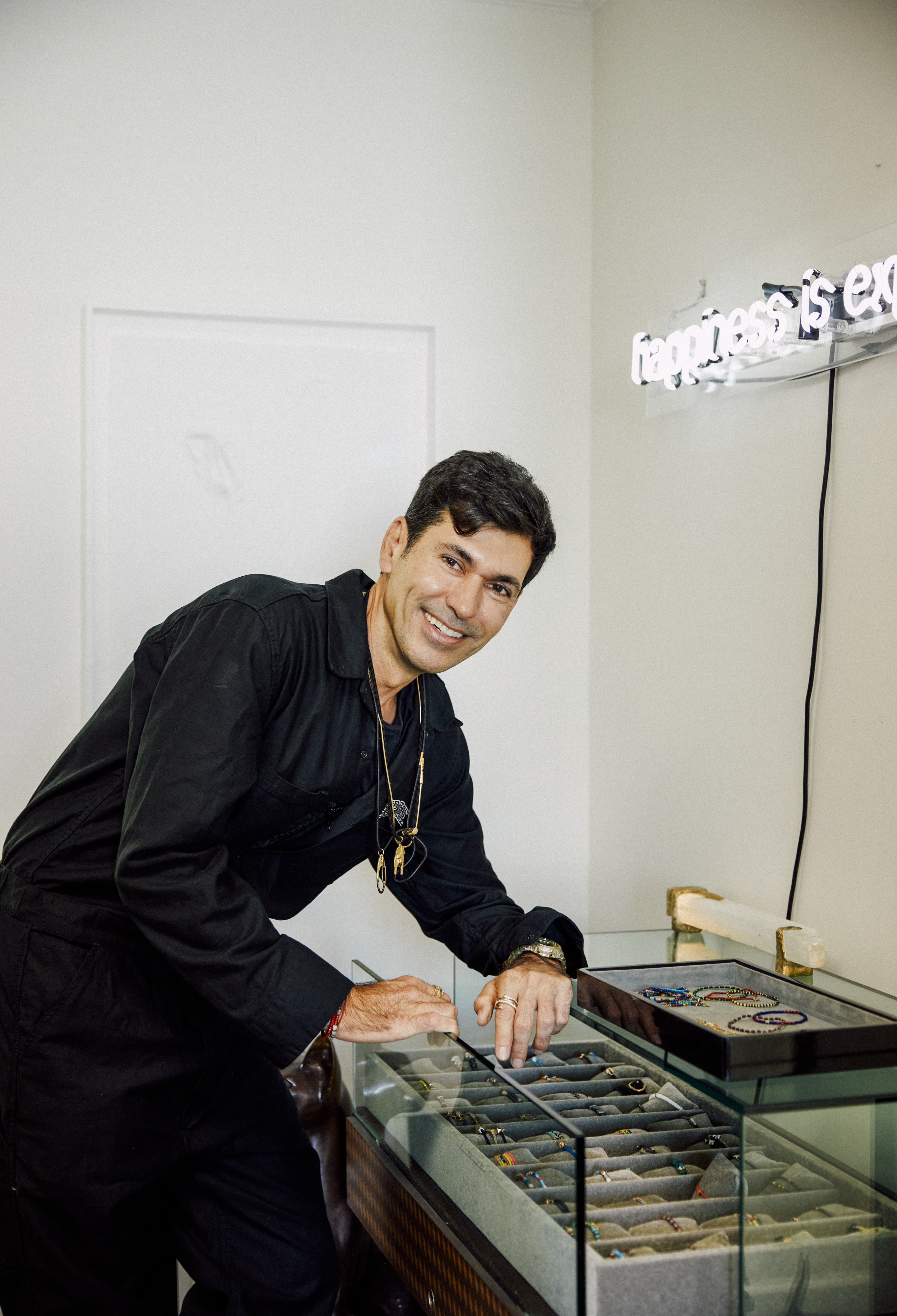 More than 20 years ago, I was in one of the lows of life. I saw a bracelet in a magazine and got obsessed — obsessed, like, “I have to have it.”

I tried to locate it and could not. I called, but the brand was a German brand, and the bracelet was just used as a prop for the campaign. They had no idea what it was all about, and that made me even more obsessed with it. So I said, “You know what? I have to make something.” It got to a point where I thought, “I cannot buy it. I cannot find it. I have to make it.” And that was the starting point from the whole thing.

So I made something similar. And then my coworkers saw it and asked me, “What is that?” I said, “Oh, I made it because I wanted it.” He said, “Well, can you make me one?” Then things started going from that perspective, people asking me to make the same item or something similar. Then I said, “You know what? I have to start charging people because I cannot be paying for their jewelry for them.” It was a simple bracelet, but I was flat broke.

After that, it took me maybe two years to realize that I had a business in my hands. There was one store where the owner saw me wearing the bracelet and asked what it was. I said I made it.

“Would you like to try and bring it over? We can try to sell it.”

From that moment on, every week I started bringing new stuff to them. But I was still keeping my job. I never thought doing this full time was an option. And then I started comparing, like, how much time I’m spending on jewelry and the pleasure that I get from it to the time that I’m working for somebody else. I had to make a decision to go on my own.

It was very organic in the beginning. Also, people pay attention to you in the beginning. Everybody wants to see what’s new and fresh. But then the maintenance of the business, that was like growing pains for me — at least as a designer and business owner, because I didn’t plan any of this. I reached the biggest stores that I wanted to sell to. And then what now? How can I keep it interesting for them season after season?

I learned during all this time the ups and downs of working with retailers and working with buyers, and also where the customer goes and what they’re in the mood for — it is a guessing game, but you have a clue after a certain time of how it’s going to move forward. There’s also this whole language you have to learn with buyers and producers. They tend to abbreviate words, so it’s just like a lingo. I remember my first time I sold to a major retailer, they sent me a catalog of how to do things. And I thought, “Oh my God, this is like going to college.” If you forget a certain thing, they’ll take money from you. It was super challenging. Now I know how it goes, but the first time you go through that … it’s overwhelming.

Same for finding producers. Nowadays, it’s easier, but it was really hard at first because people didn’t want to share much about who they work with. It was like the secret of the business. And then once you get those names, it’s also a question of they have to know you and you have to know them and see what we can do together. It was challenging for me to open up to people that I don’t know that well. But after that first step was done and we tried out some initial test runs, it was much easier for me to let go and let people do what they have to do.

Ultimately, I would describe my style as fun, fine jewelry. You can wear it any place. People still think of jewelry like tiaras and big earrings and things like that. But we want pieces for you to wear every day, for you to have with you all the time. It’s not for you to have, like, “I’m going to put it on when I go out or when I’m going to go for a party,” nothing like that. We think a lot about the materials that we use, they are precious materials. And sometimes, we combine inexpensive with expensive on purpose so it makes it more casual for you to be able to enjoy it as much as you should.

Get Your Copy of the 2022 Retail Trends Report