WASHINGTON, D.C. – Small business owners are highly engaged in the 2020 presidential election campaign, as 60% say they are paying “a lot” and 30% “some” attention to it. With near unanimity, they say they are likely to vote in the general election. Sixty percent approve of the job that Donald Trump is doing as president, and 52% think their business would be better off if he is reelected. They are somewhat less likely to say they would be better off if the Democratic nominee wins the election (41%).

These findings are from a Jan. 15-24 nationwide Square/Gallup online survey of small business owners with annual revenues between $50,000 and $25 million.

Most small business owners rate the financial condition of their business positively – 56% say it is “excellent” and 38% “good” – and 69% report that their business benefited from the 2017 tax reform law. More than seven in 10 say they reinvested over one-quarter of the savings that
resulted from the tax law in their business.

Yet, other policies have had a less positive effect. Seventy percent of small business owners say the cost of healthcare has had “a lot of” or “some” impact on their ability to hire and retain employees, and half say the same of changes to U.S. immigration policies since 2017.

Among a list of six public policy issues, taxes receive the most mentions: 32% of small business owners say taxes are the greatest impediments to their business operations in this election year. Government regulations (21%), healthcare (20%) and U.S. trade tariffs (15%) are second-tier obstacles, and climate change (7%) and immigration (5%) are at the bottom of the list. 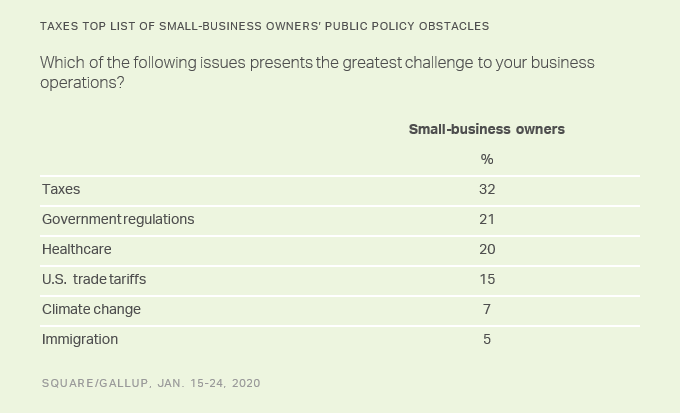 Asked which party would do a better job of handling these six issues, small business owners are more likely to favor the Republican Party for taxes, immigration and tariffs, and the Democratic Party for healthcare and climate change. Owners are closely divided between the two parties on government regulations. 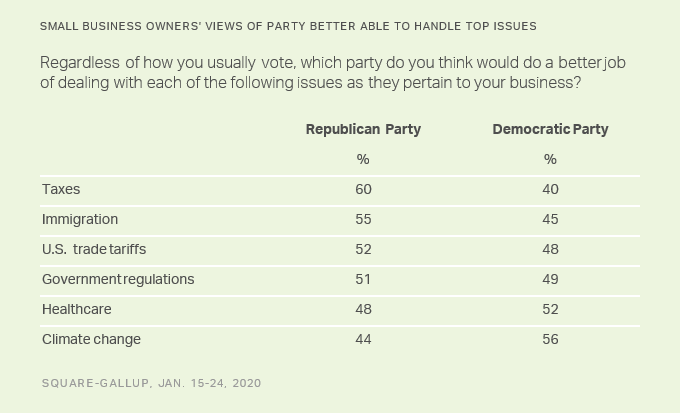 Among those who say they plan to vote in a Democratic primary or caucus, 22% of small business owners say they will support Joe Biden, while 17% say Michael Bloomberg, 14% Bernie Sanders and 13% Elizabeth Warren. Thirteen percent are undecided, and fewer than 10% plan to support Andrew Yang, Pete Buttigieg or Amy Klobuchar. 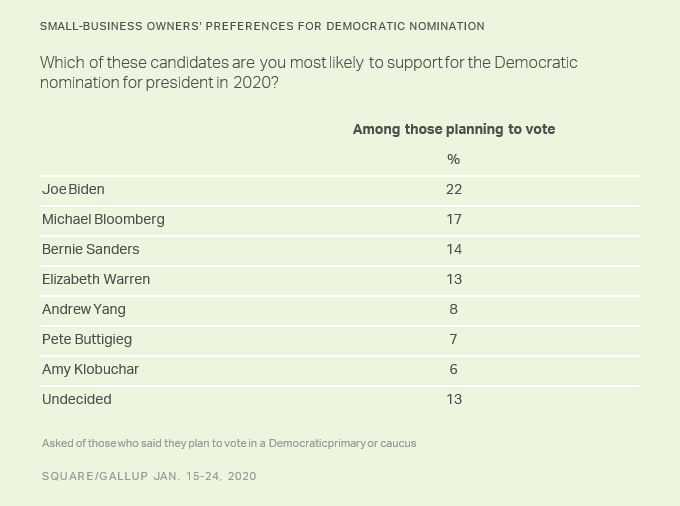 Though trailing Biden overall, Bloomberg does especially well among independent and Republican small business owners who plan to vote in a Democratic nominating contest in their state.

Turning to November, even though they are more likely to identify as Republicans (40%) than Democrats (33%) or independents (26%), small business owners are closely divided as to whom they say they would support in the general election. In seven hypothetical head-to-head matchups, no more than four percentage points separate Trump from each potential Democratic nominee. Bloomberg is the only Democratic candidate who edges out Trump. 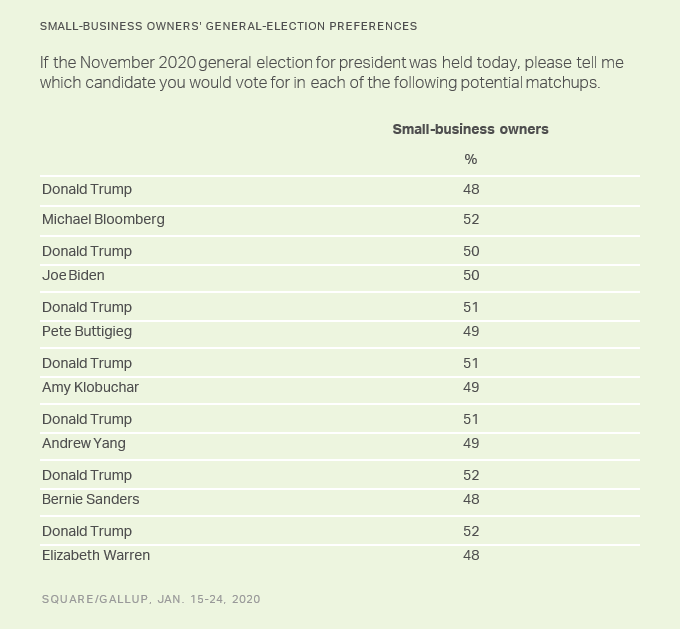 There are more than 30 million small businesses in the U.S., and this constituency is an important one for any presidential candidate to win over. Most small business owners indicate they have benefited from Trump’s 2017 tax law and report that their businesses are in good financial condition today, which would seem to be a positive sign for Trump.

They are paying a lot of attention to the 2020 presidential election, and most plan to vote. But while their approval of the president is high, smaller percentages support him in general-election matchups with seven potential Democratic nominees. The Democratic presidential candidate with the most crossover appeal to Republican and independent small business owners is Bloomberg, who, like Trump, has a business background. Bloomberg also gives Trump the toughest test in the head-to-head matchups.